·
This IS the way it will happen. It already has in a few states...
It’s a Sunday night and your family has all gone to bed. You let the dogs back in and lock the deadbolt like you do every night. All the lights are off now except a couple of night lights scattered throughout the house leaving that dim glow throughout your home. It’s bedtime and work and school are going to come early in the morning. You crawl in bed, kiss your wife and drift off to sleep being thankful for the air conditioning that allows you to pull that heavy quilt up over your shoulder despite the fact it’s still 85 degrees outside. A few hours pass...

0200 Monday morning and your wife taps your leg and says, “baby I heard something outside”. As you sit up in bed you hear the dog growling in the living room and you know something isn’t right. You grab that trusty 'ol 870 and head into the living room. Your wife grabs her 9mm and heads down the hall to the kids rooms just like you have rehearsed. “Good boy” you say as you enter the living room, trying to calm both the dog and your wife just as splinters fly across the room and the front door flies open. “Oh shit!” As you shoulder your weapon and send a load of 00 Buck across your living room and see the perpetrator fall in a heap. Before the “thank God” can even run across your brain, you see a second man coming in the door and you fire again. This time you hear the pop of your wife’s 9mm as she has joined in the fight. It has to be those damn meth heads from down in town! Just then you are consumed by a wall of bullets as you see multiple muzzle flashes from just outside the door and you realize something isn’t right. You turn to yell at your wife to “get down” just in time to see her take a load of buckshot to the face and her brain matter splatter the wall behind her. You feel the burning as 5.56 rounds riddle your body. One clips your spine as you’re scrambling away and paralyzes your lower body. The last thing you see before you bleed out is a SWAT guy from your local PD holding your teenage daughter on the floor with a knee in her back as she screams and cry’s because she just watched her parents being murdered.
Why did this happen? You’re no criminal. You’re a Conservative and an honest family man. Your wife is a school teacher and your daughters are on honor roll. Why did this happen?
Well two days ago, you and your wife went down to welcome the new neighbors to the community. Your wife made them some of her “world famous” cookies and you invited them to church on Sunday. Later that afternoon, you got a friend request on Facebook from your new neighbor, which you gladly accepted. They seemed a little odd, but in the few minutes you talked they were pleasant enough. The next day while you and your family sat in church, your new neighbor scrolled through your Facebook profile. He saw that “Trump 2020” post and got infuriated because he’s a staunch liberal and he hates your kind. The next thing he sees are the hunting pictures you took last fall when your daughter bagged her first buck. Now he’s seething with fury because he is wholeheartedly against the “slaughter of innocent animals”. Next he sees your post from the last range day with your buddy and sees those scary black assault weapons on the table and that does it! He has to do something about the racist, right wing extremist, domestic terrorist living next door. He picks up the phone, calls the local Sheriffs Office and reports you as a threat under the new Red Flag law. The Sheriffs Office follows their SOP’s and conducts a no knock warrant because you have now been denied due process and you are considered guilty until proven innocent.
Now you, your lovely wife and two deputies have been killed for nothing. Your daughter will have absolute hell for the rest of her life. She will never be that successful person you dreamed for her to be because of the mental tragedy caused from seeing her parents murdered. The local news paper will report that you were killed after firing-on, and killing, two deputies and that “over a thousand rounds of ammo and 22 guns were confiscated from your residence”.
Oh... those two deputies were just following orders. They left behind families as well and had served their community for over a decade. They didn’t know you were a stand-up guy with a great family. They weren’t allowed time to investigate things under due process. They were told you had threatened your neighbor and were out in the street waving an AR15 around.
This is the reality of Red Flag gun laws. Innocent people will lose their lives, including police serving these unconstitutional no-knock warrants. Red Flag laws will be used for petty and vengeful reasons without merit by gun hating liberals who believe if you own guns, that it somehow automatically makes you a threat to society and therefore you are a right wing extremist domestic terrorist who MUST be stopped and neutralized at all costs (for the safety of others). 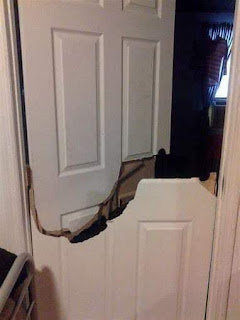 Do not forget that ALL gun laws are an infringement of your rights! Now, call and write all of your elected officials including the president, and let them know how you feel! Yes, it’s that important! V
Posted by Paul Hicks at 4:32 PM